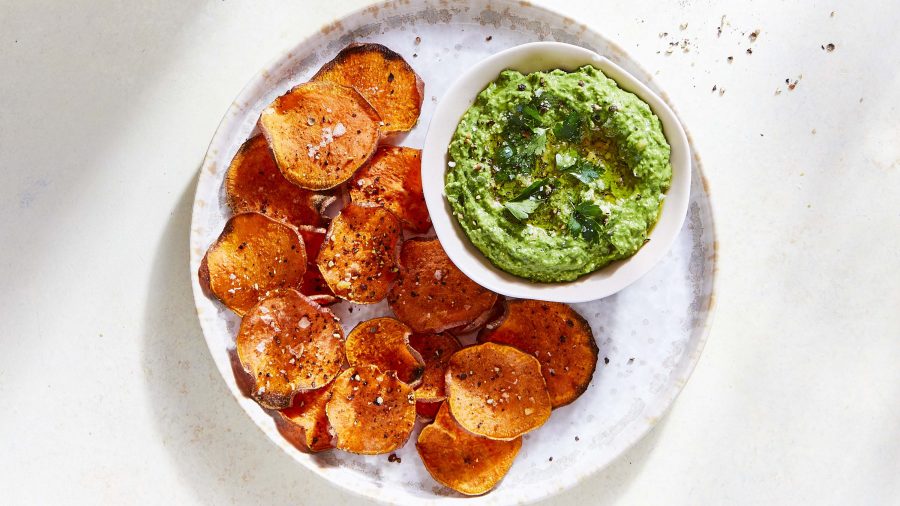 Guacamole is a staple at New York City–based recipe developer Michelle Kresch Gilbert’s family gatherings. With the addition of basil, parsley, and some Parmesan, she created a mashup of two popular green dips: guacamole and pesto. “It’s best served with something colorful and crunchy, like raw radish or jicama, but fresh sweet potato chips make a great vessel to carry the dip,” she says.

A Passover seder is an important yearly tradition. Each spring, family and friends gather around the table to relive Jewish history by reading the Haggadah, a religious text. But the fare, similar to many celebratory meals, can often be overly heavy, so New York City–based recipe developer Michelle Kresch Gilbert created three lightened-up dishes perfect for the holiday.

Get creative with how you use eggs in the kitchen this Easter. The simple food is filled with protein and B vitamins. And, to put the endless debate to rest, recent research shows that you can eat as least as many as seven eggs a week with no adverse effects on cardiovascular health. Here, dishes for a hearty breakfast, lunch, or dinner.

Perusing the sausage section of the grocery meat aisle, Erin Patinkin and Cara Nicoletti noticed that all the packaging looked pretty much the same. “It was all hunter green, red, and black and most had the same font and a man’s face on it,” recalls Nicoletti.The two had decided to start a sausage company, Seemore Meats & Veggies, years after Nicoletti began experimenting with sausage making at Brooklyn butcher shops. Patinkin, a veteran of the food industry who co-founded the bakery Ovenly, knew early on she wanted to be a part of it. Seemore sells a very different kind of sausage: one that is comprised of up to 50 percent humanely raised meat and 35 percent vegetables, with the remainder being seasonings and ingredients like cheese. The brand (named after Nicoletti’s grandfather) launched in the beginning of 2020. According to the co-founders, its stated mission is “to make it easier to eat well.” Furthermore talked to Patinkin and Nicoletti (who also hosts two shows on Vice’s food vertical, Munchies) about their sustainability initiatives, the impact of quarantine on their company and schedule, and more:

Connection is at the heart of home cooking, which is why Shiza Shahid, the co-founder of Our Place, an elegant kitchen and dinnerware company known for their cult-favorite Always Pan, says it’s especially important right now. “Even while we are physically distancing, we can still choose to show up.”The former Malala Fund CEO combines staples from her native country of Pakistan (like turmeric, ginger, and tomatoes) with the local olive oil and seasonal produce she finds in her home of Los Angeles.Here, she shares tips for hosting a virtual gathering: